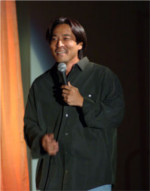 His penchant for dry wit, lighthearted sarcasm and deciphering life's ironies has led him to the majority of the contiguous 48 states as well as Alaska and Hawaii. The sly take that he has on his own ethnicity continually proves to be a popular feature of his act. In 1996 he became an international performer when he joined the United Service Organization (USO) and now tours regularly with the “Comics On Duty” (Davis Entertainment) providing comic relief to American military troops stationed around the globe. Bob has now spun his material in Iraq, Afghanistan, Pakistan, Bahrain, England, Iceland, Hungary, Belgium, Bosnia-Herzegovina, Japan, Korea, Singapore, Diego Garcia, Australia, Haiti, Honduras, Cuba, and many more. He has also performed in Hong Kong for English-speaking residents of the city's bustling business and finance community.

Bob has apeared on nearly a dozen comedy programs featuring stand-ups, from Comedy Central to A&E and MTV.

Mr. Kubota is also a world-class exponent of deceptive sleight-of-hand. Do not play cards with him. He currently resides in Phoenix, Arizona with Ilene, his wife, Nancy, their corgi-mix, a laptop and a golf swing that he built himself.