Translating as “Jazz with Soul” Jazz Con Alma provides just that.  Led by pianist Beth Lederman, the band mixes rhythms from swinging sambas, groovin’ mambos, soothing bossa- novas and romantic boleros into traditional jazz and Latin repertoire. Rooted in the spirit of improvisation and fun, this group brings the musicality and excitement of this creative art form to life.

Jazz Con Alma has performed at the following venues: 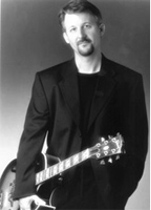 Pete Pancrazi being named recently by Downbeat Magazine as "one to watch" and a guitar player "deserving greater attention" is no surprise to those who have heard him perform. Audiences in Arizona voted him the "Jazz Guitar Player of the Year" in AzJazz Magazine's 2000 Readers' Poll.

This graduate of the Berklee School of Music in Boston has been "one to watch" in the Phoenix area since taking up residence here in 1990. Through the years, he has cultivated a large and loyal following. Audiences enjoy his nimble guitar work and warm vocals in settings ranging from his solo performances at The Duck & Decanter to the complexity of his quintet at the Desert Botanical Gardens.

While in Boston, Pancrazi won the Berklee Performer/Songwriter Award four times as well as becoming a two time all around winner of the Berklee Songwriter Competition. He also received the Boston (ASCAP) Songwriter's Award and the Berklee Performer's Scholarship. He continues to delight audiences with his growing repertoire of original compositions, presented in performance alongside straight-ahead and Latin jazz standards.

Igor's Jazz Cowboys play acoustic Western Swing accompanied by a hot horn section. Just imagine Louis Armstrong singing with Roy Rogers and his boys - you get the picture. With roots stretching from the Great Southwest all the way over to Dixie Land, Jazz Cowboy music is sure to get your feet stomping.

The one with the handlebar mustache and beard? That's Igor. Not only can he play the upright bass like the dickens, but he can sing beyond 3 octaves.

Igor's Jazz Cowboys ride the Jazz Trail from Connecticut to California, and Canada to Florida. Sometimes the posse loads the horses and goes overseas. They've appeared in Australia, throughout Europe, and in Israel.